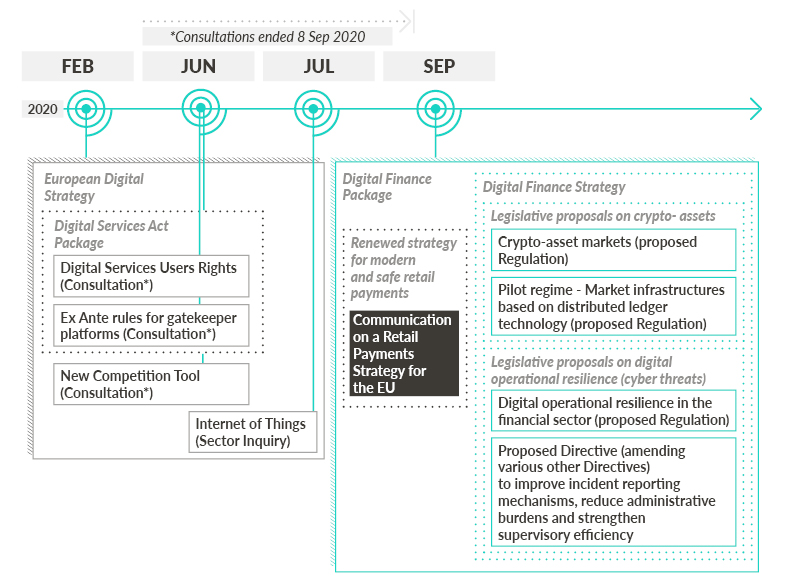 On 24 September 2020, the Commission adopted its new Digital Finance Package. The aim of this package is to ensure that the EU legal framework will be fit for purpose into the future, particularly in light of the pace at which the digital revolution is reshaping financial services. Included as part of the package is the Commission's Digital Finance Strategy Digital Finance Strategy, which itself includes: (a) Legislative proposals for an EU regulatory framework on crypto-assets1; and (b) Legislative proposals for an EU regulatory framework on digital operational resilience2.

Adopted in parallel with the Digital Finance Strategy (and included as part of the overall Digital Finance Package) is the Commission's Renewed strategy for modern and safe retail payments. The Commission's stand-alone retail payments strategy pays recognition to the fact that, due to the unique pace and scale of technological change in the sector, retail payments are set to play a leading role in the financial services revolution. The Commission Communication on a Retail Payments Strategy for the EU sets out the key actions the Commission plans to undertake (in collaboration with relevant institutions and advisory bodies) over the next four years.

The Commission is set to target certain payments providers it sees as restricting or blocking access to technical infrastructures necessary for the development of innovative payment solutions by other payments service providers. Included in these technical infrastructures are both software elements (e.g. point of sale (POS) kernels, the software required for POS terminals to perform contactless transactions), and hardware elements (e.g. Near Field Communication (NFC) antennae embedded in smart mobile devices used to perform contactless payments (commonly known as digital wallets)). According to the Commission, a commonly reported issue relates to device manufacturers restricting third-party access to embedded NFC technology, resulting in consumer choice being restricted to the device manufacturer's native digital wallet app in order to be able to make contactless payments.

As part of its retail payments strategy, the Commission is considering whether it is appropriate to propose legislation aimed at securing a right of access for third-party providers to these necessary technological infrastructures under fair, reasonable and non-discriminatory (FRAND) conditions. In its examination of the issue, the Commission will take into account: (a) its ongoing review of its competition policy to ensure it is fit for the digital age (which includes its consultation and examination of the need for a New Competition Tool); and (b) its ongoing work on the Digital Services Act with regard to ex-ante rules for large online platforms acting as gatekeepers. Any Commission proposal would lay down the criteria for identifying the necessary technical infrastructures and determining to whom and under what conditions access rights should be granted.

FRAND commitments are commonly associated with competition law cases where the owner of a patent (that has become so widely incorporated that it is generally accepted as being a standard essential patent) refuses to grant a licence on FRAND terms. The application of a FRAND framework would, in effect, designate the relevant technical infrastructure as a technical standard. Owners of any patent protected technology incorporated into that standard would then be required to license the technology to interested third-parties on fair, reasonable and non-discriminatory (or FRAND) terms.

Is a FRAND framework the solution?

Competition law is generally concerned with policing cooperation between competitors, as this can often lead to harm to consumers. However, it is commonly accepted that standardisation (often under FRAND frameworks) facilitates interoperability that can greatly benefit consumers (e.g. by fostering innovation through facilitating ease of take-up thereby rewarding the innovator). Standardisation enables multiple devices and systems to be compatible regardless of the manufacturer or the platform on which those devices or systems are being used. A 2019 European Parliamentary Report  on the issue recognises the particular importance of standardisation in the information and communication technology (ICT) sector and Internet of Things (IoT) sector (consumer electronics, automotive industry, and electricity grid industry).

Potential bugs in the FRAND system

Due to the obvious tension between the goals of intellectual property rights and competition law, FRAND frameworks are not without their difficulties. Issues can arise, for example, in reaching a consensus between parties as to what is FRAND in a particular scenario. Disagreements over the value of royalties that should be considered fair and reasonable can lead to inconvenient hold-up of technology diffusion. As recently as December 2019, a group of 27 large tech companies complained to the Commission about the refusal of a small number of unnamed patent holders to licence essential technology on FRAND terms, stating that the behaviour presented "a direct and immediate threat to innovation, and the success of leading European technology companies".

All part of the plan

The goal of a pan-European payment solution has been on the Commission's agenda for some time. However, that goal is attracting renewed focus due to the leading role that the Commission sees retail payments playing in the overall development of Europe's digital economy into the future. The Commission is clear in its concern that the current trend of restrictive standards is standing in the way of the emergence of pan-European payment solutions. The consideration of a FRAND framework relating to one link in the retail payments chain can be seen as an incremental step in the Commission's wider digital agenda. A variety of stakeholders, including member banks of the recently launched European Payments Initiative European Payments Initiative (working to offer a pan-European payment solution by 2022), will no doubt be watching these developments with interest.

For further advice or information on the competition law aspects of the Digital Finance Package, the Commission’s renewed retail payments strategy or the Commission's various initiatives relating to the regulation of digital markets now and in the future, please do not hesitate to contact Thomas O’Donnell or any member of the ALG EU, Competition and Procurement team.

1 See the Commission's proposed Regulations on: (a) Crypto-asset markets; and (b) Pilot regime relating to market infrastructures based on distributed ledger technology

2 See the Commission's proposed: (a) Regulation on digital operational resilience in the financial sector ; and (b) Directive (amending various other Directives) to improve incident reporting mechanisms, reduce administrative burdens for financial institutions and strengthen supervisory efficiency