The most active sectors for M&A deals notified to the CCPC during 2017 were the energy, food and drink, and media, telecoms and broadcasting sectors.

Dr Vincent Power, partner and head of EU and Competition in A&L Goodbody said: "The list of notifications during 2017 was a very wide ranging list from acquisitions by billion dollar funds to the sale of convenience stores.  2017 proves that the Irish regime captures a very wide net of deals." 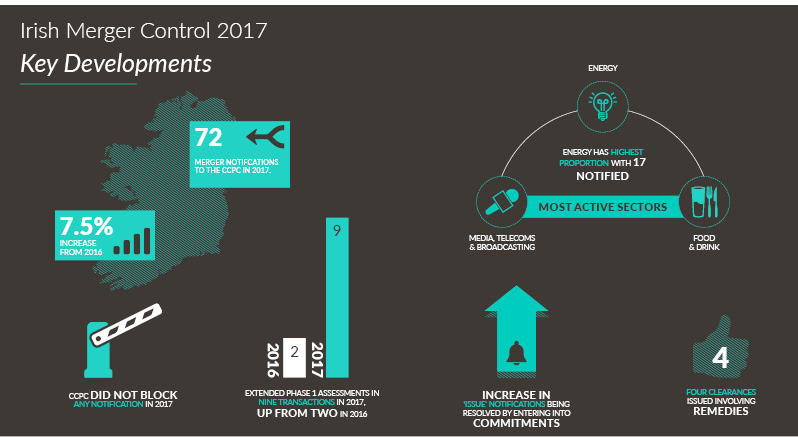 Notable M&A deals notified to the CCPC include:

Some important pointers as to how media plurality in Ireland is likely to be interpreted in the context of future media mergers were given in 2017 following the Phase 2 assessment of the Independent News & Media/CML notification and the extended Phase 1 assessment of the Twenty-First Century Fox/Sky notification to the Minister for Communications, Climate Action and Environment.

The Department of Business, Enterprise and Innovation launched a public consultation on 29 September 2017 regarding a review of certain Irish merger control provisions, the most important of which relates to whether the current financial thresholds for mandatory notifications should be increased.

Dr Power commented: "Businesses in Ireland, and internationally, are waiting to see if the thresholds will be increased with great interest. This could result in a decline in notifications to the CCPC but the CCPC will probably continue to keep deals below the compulsory thresholds under review so business leaders need to have all deals, no matter how small, reviewed for competition law compliance.”

Dr Power also added: "It is too early to see a definite pattern because of Brexit.  But some implications of Brexit on M&A are becoming clearer. First, if the UK leaves the EU and there is no special deal done on merger control then far fewer Irish-centred M&A deals will be notified to Brussels because these deals will often lack sufficient EU turnover – at present, the UK-related turnover counts as EU turnover and that is what tips the balance in many Irish-related deals. Converting UK turnover to non-EU turnover would take most of the Irish deals which have gone to Brussels out of the EU net. This would ordinarily mean more notifications across the EU for Irish businesses.  Secondly, the UK could well introduce new criteria in merger control other than just competition post-Brexit (e.g., to protect UK interests) and the current regime liberal regime might not exist."

For full details on the report, please see our Review of Irish Merger Control in 2017.

For more information, contact  any member of the EU, Competition & Procurement Group at A&L Goodbody.